If you think that building a product only after you have started selling it to people is a mad idea, we are here to show you great minimum viable product examples that prove the opposite.

MVPs can be any ideas or products that feature only a limited set of functions or capabilities that are still enough to prove your concept in a determined market.

Whether you are working on app development or a vegan dog-treats business, building an MVP may save you time and money on the way to commercializing a finished product, and the definition doesn’t stop there, since you can also ask yourself about minimum viable channels, segments, services or promotion.

Facebook, Dropbox, and Zappos have all in common that they started as minimum viable products, proving that investing tons of money is not always a requirement for launching a big business, but the ability to listen to your market and carefully cater to them according to their feedback of your ideas.

In this article, we will show you what the different types of MVPs are and give you examples so you can get inspired and easily venture out into the wild world of product and service development. We will also explore some minimum viable product examples.

In the world of startups, it is common to see state-of-the-art tech that no one really knows what to use for. This probably happens because creators often focus on bringing finished products to the market without first considering if consumers really want them, and here’s where MVPs play a vital role in redefining business models.

Think about the overhyped Google Glasses that were about to be released in May 2014 for $1,500. The company focused so much on product features such as using a VR platform via voice commands (which sounds really nice) that they forgot people didn’t want to wear glasses in the first place.

There are two classifications of MVP: low fidelity MVPs serve for better understanding your consumer’s needs and see if your solutions are worth enough for solving their problems, while high fidelity MVPs focus more on how much would they pay for your product and getting early adopters that can later help you redefine your value proposition as you listen to them.

Choosing between high fidelity or low fidelity MVPs depends on how much time you have and how much are you willing to spend on this stage of your product development.

A landing page is a website designed to motivate visitors to carry out a specific task (give you their email, see your products or buy them) once they have clicked on a marketing communication such as an Instagram ad. This is a great way to show them what you have and prove if your communications are going the right way.

Buffer, an app designed for scheduling social media posts, is an extraordinary example of this. Their MVP was a landing page that explained the platform’s capabilities and encouraged people to sign up. However, by that time the app actually didn’t exist at all so customers were shown a message saying the service wasn’t ready and that they would be receiving updates.

Once the creators had a database of enough possible users, they started asking them if they would be willing to pay for the service. What they did is testing that hypothesis by adding prices to the landing page. This allowed them to see how many visitors would actually turn into paying customers. 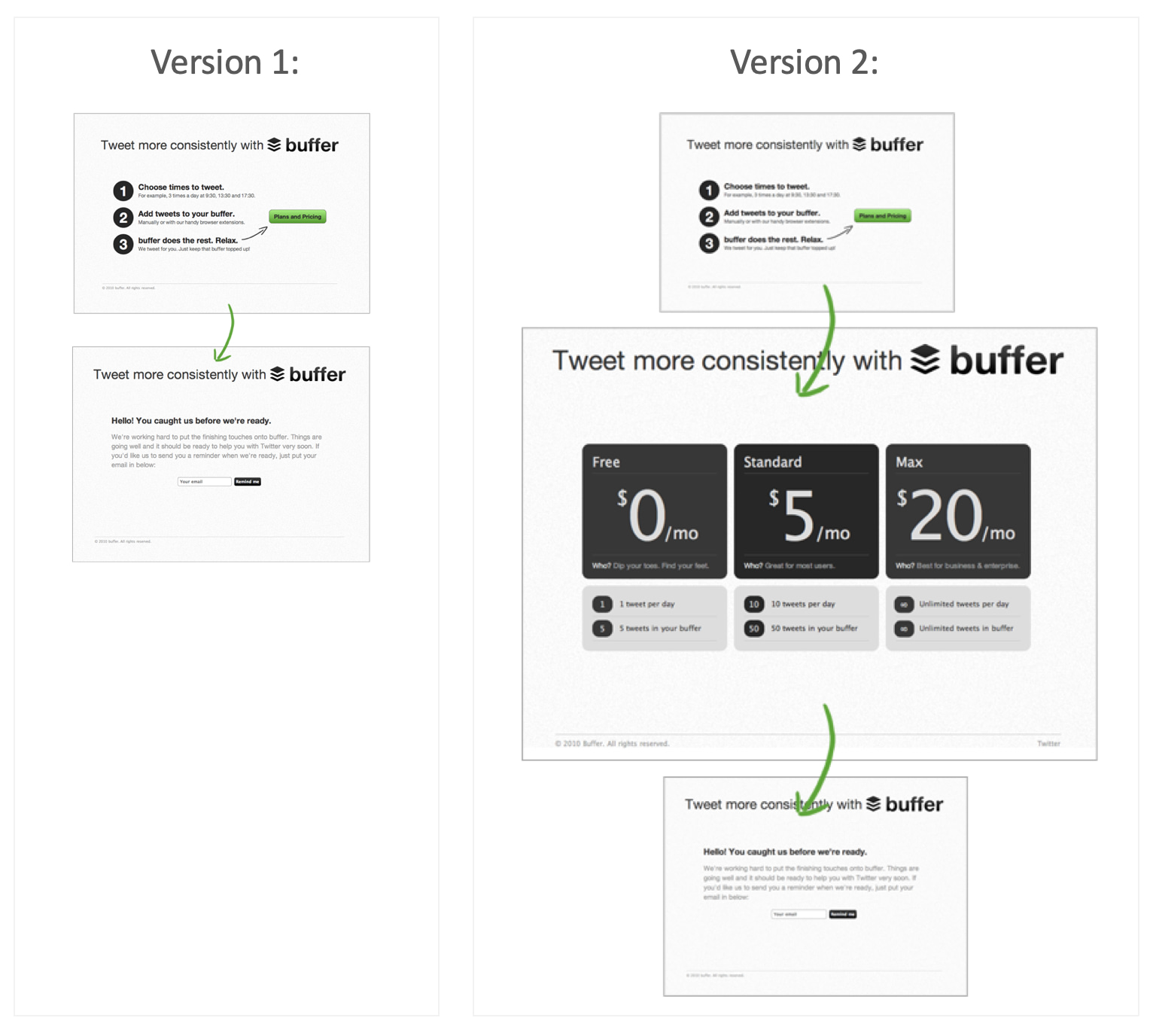 Image by The Mobile Spoon

Short videos are one of the most popular MVPs out there. They are zero-risk, cheap to elaborate, and effective for communicating complex ideas surrounding your product and services. They are so versatile you can post them on MVP platforms such as GoFundMe, show them to investors and even people on your way.

You would be amazed to know that Dropbox, which has a market cap of 11.9 billion, started as a 2-minute MVP that explained with paper figures how the cloud service worked.

Ad campaigns allow you to test if you are targeting the right audiences. With platforms such as Google and Facebook ads, you can even measure what are the features of your products that people appreciate.

Using CGI imagery on your ads is a creative way of testing your product’s appeal. You can do this for a fraction of the real cost of manufacturing a real product by hiring a designer at a platform such as upwork.com.

If people actually try to buy the product once they have reached your website through your social media ads, you can tell them the product is out of stock, and even give them a coupon, a gift card or a discount code they can later use when the product is available. This is great for proving if the market wants the product before you go to the manufacturing process.

If you have already passed the discovery phase of your product, crowdfunding is by excellence the best way to promote your projects. With just a simple explainer video you can easily test the market while you raise money and get early adopters.

A great example of an MVP that started as a crowdfunding project is the board game Kingdom Death Monster, which raised $12.4 million from more than 19,000 people back in 2016. Back then, they used clear images and a great explainer video before they had started production.

This MVP consists of creating an illusion of a product, which translates into people thinking they are experiencing the real thing while you are actually using a human resource behind the

curtains. The Wizard of Oz is adequate for analyzing the demand of a product while you keep the operational costs low.

A noteworthy example of The Wizard of Oz is Zappos, a shoe company that was acquired by Amazon in 2009 for $1.2 billion. This business started with its founder Nick Swinmurn posting pictures online of shoes that he didn’t have in stock but that were for sale in stores nearby his home. Once customers bought him a pair of shoes through his simple website he would manually process the order, buy the shoes and send them.

In Huenei we have a specialized team of engineers that build MVPs for your tailored software projects. Our methodological approach starts with a need analysis and then we design a solution proposal for proving concepts no matter the resources.