Internet History and Evolution: Everything You Need to Know

The Internet is the network of networks, the global network. Technically, we can understand the Internet as a global communications system that allows access to information available on any world server, as well as interconnect and communicate with temporarily or physically remote citizens. Want to know more about internet history and evolution?

There is no doubt that the internet has a central role in our lives. As consumers, citizens, professionals, and companies, the internet cuts across almost all of our day-to-day environments and activities. Surely it has happened to you that for some reason you forget your cell phone, or you are somewhere without a mobile signal, and you feel like something is missing…

Did you know that the internet was born in a military environment? The history of the internet has several mysteries that you probably did not know. In this article, we want to make a brief tour of its birth and history, as well as the main stages of the development of the Internet. We are also going to tell you about the key success factors that allow it to continue developing as a provider of solutions for users. 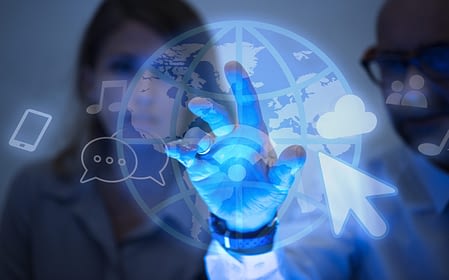 A little bit of history…

The forerunner of the Internet was ARPAnet (Advanced Research Projects Agency Network), a computer network that was born in 1969 to function as a means of communication and delivery of military information, in addition to connecting research groups in the United States. The renowned Network Control Protocol (NCP) was first implemented on the ARPAnet. In addition, it also ran the first version of TCP/IP, the Internet protocol that we use today to access the web.

ARPAnet ended in the early 1990s, but the 1980s saw the rise of what became known as the Web. On April 30, 1993, the World Wide Web (WWW, today also simply called the Web) was launched, beginning the history of the Internet.

Over the years, the web managed to evolve from different aspects. Mainly, the rigidity of access and the number of connected users gave rise to the constant development of the Internet, which could adapt and adopt new fields of application and types of interaction available for user experience.

Web 1.0. This was a system based on the HTML language that simply allowed to classify information of various types. These were static websites, that is, “sites to read and not to interact with”. This idea replicated the traditional, passive media, dominant in the so-called era of the information society.

Web 2.0. With the second stage of the evolution of the Internet, participation-oriented sites emerge. The main pillar was the generation of content, so the introduction of dynamic websites that allow more user interaction was key. In other words, these are “read and write sites”, as opposed to the previous stage. Web 2.0 is said to have marked the beginning of the social internet, characterized by blogs, wikis, social networks, and so on. This instance of web development is based on the knowledge society, the self-generation of content, and the means of active consumption.

Web 3.0. The last stage of evolution is characterized by the introduction of new personalization and search alternatives. The “intelligence” of search engines becomes essential in Web 3.0 and users begin to “talk to search engines”. Thanks to these advances, the user no longer has to focus on how to make his queries, but simply ask Google what he needs. This is why a good SEO optimization of your site is essential. Thus, the famous concept of “Restaurants near me” was born in Web 3.0.

Why is the Internet so successful?

Several factors helped the internet develop. The progress of the different stages of the web that we discussed above allowed the user to internalize the different platforms and become familiar with their use. In addition, the possibility of access to information and communication that the web introduced is unmatched.

We believe it is also relevant to mention some technical factors that allowed the Internet to reign:

So, we’ve learned a lot today! The history of the Internet is exciting. Those of us who love technology, like the entire Huenei team, are always aware of the latest news and we love to share them with you. Now we invite you to reflect… Think about what features of Web 1.0, 2.0, or 3.0 you can take advantage of in the development of your business. We would like to be able to accompany you in the process!